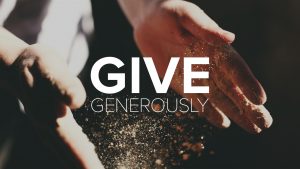 TOPIC OF OPEN HEAVENS FOR WEDNESDAY 11TH SEPTEMBER IS “NOTHING IS TOO SMALL TO GIVE.”

“The liberal soul shall be made fat: and he that watereth shall be watered also himself.”

32. Then Jesus called his disciples unto him, and said, I have compassion on the multitude, because they continue with me now three days, and have nothing to eat; and I will not send them away fasting, lest they faint in the way.
33. And his disciples say unto him, Whence should we have so much bread in the wilderness, as to fill so great a multitude?
34. And Jesus saith unto them, How many loaves have ye? And they said, Seven, and a few little fishes.
35. And he commanded the multitude to sit down on the ground.
36. And he took the seven loaves and the fishes, and gave thanks, and brake them, and gave to his disciples, and the disciples to the multitude.
37. And they did all eat, and were filled; and they took up of the broken meat that was left seven baskets full.
38. And they that did eat were four thousand men, beside women and children.
39. And he sent away the multitude, and took ship, and came into the coasts of Magdala.

An African adage says, “Saying ‘this gift is too small to give’ makes one miserly.” In the Spirit of giving. I believe that a simple orange is enough to entertain four guest even eight! It is just a matter of slicing those four again to make eight pieces. Served on a clean plate along with a clean bowl of water and a neat hand towel in tow, you have done the needful if that is all you have. Today’s Bible reading tell the story of a young lad who did not see his lunch pack has been too small to give to the master.
He released it and it became a point of contact for divine multiplication. One great lesson from this is that anytime a small thing is released into divinely anointed hands, it multiples. Any business that has God as his CEO will always prosper, irrespective or its size. We see an example of this in the story of a man who started a business with five hundred dollars and a vow that 90% of the business would be God’s, while just 10% would be his. In a few years he became a multi-millionaire! The lad who offered his meal to Jesus can be regarded as a true son of Abraham in that he was given to hospitality just as Abraham was. Abraham was so hospitable that he unknowingly entertained angels (Hebrews 13:2).
You don’t necessarily need to be a multi-millionaire before you can become a giver. Indeed, having the whole world at your disposal does not make you a giver! The widow of Zarephath gave her last meal to the hand of God. This meal was so small that it took only two sticks of a firewood to prepare it (1 King 17:12). Beloved, for you to move from your present level of blessing to a higher level, you need to learn how to give. Through the principle of giving, some heroes of faith in this days of old used what they had to obtain a good heritage for themselves.

This principle has not changed today. There is the story of one my sons in the Lord, who was in His house one evening when a young man came to beg him for some money to buy food for his young baby. This son of mine said he has only ten naira with him at that point. The value of naira back then was enough to take him to work and back. So, he gave the man five out of the ten naira with him, and he forgot about that incident. Months later, this young man came back again, this time asking my son if he was interested in owning some landed property.
My son answered yes, even though he had no money for such a project at that time. To his surprise the young man offered him a plot of land from the portion of land allocated to him and his siblings, with the option of paying later. When my son insisted that he was not going to take the land, the young man remanded him of the five naira he gave him many months ago that save his child from starving from death. It was then my son remembered what had happened, and he consented to the land offer. That land was the beginning of some other properties God blessed him with. Beloved, nothing is too much to give. Learn to give from today, because you do not know what doors it will open for you.

Some door can only be unlocked through giving.

BIBLE IN ONE YEAR: