10 And he was teaching in one of the synagogues on the sabbath.

11 And, behold, there was a woman which had a spirit of infirmity eighteen years, and was bowed together, and could in no wise lift up herself.

12 And when Jesus saw her, he called her to him, and said unto her, Woman, thou art loosed from thine infirmity.

13 And he laid his hands on her: and immediately she was made straight, and glorified God.

14 And the ruler of the synagogue answered with indignation, because that Jesus had healed on the sabbath day, and said unto the people, There are six days in which men ought to work: in them therefore come and be healed, and not on the sabbath day.

15 The Lord then answered him, and said, Thou hypocrite, doth not each one of you on the sabbath loose his ox or his ass from the stall, and lead him away to watering?

16 And ought not this woman, being a daughter of Abraham, whom Satan hath bound, lo, these eighteen years, be loosed from this bond on the sabbath day?

17 And when he had said these things, all his adversaries were ashamed: and all the people rejoiced for all the glorious things that were done by him.

We will start a study on exposing demonic operations today and it will run for the next five days. I am believing God that by the end of this series, any operation of the devil in your life would have been destroyed in Jesus’ name. Please take the points in this series very seriously; pray them fervently throughout the day. Remember that it is the effectual fervent prayer of the righteous that avails much (James 5:16).

When we talk about demons operating in human beings, they come in various categories. There is the demonic operation called oppression. When somebody is oppressed, it is as if the fellow is carrying a very heavy load, yet he or she cannot put it down.

How God anointed Jesus of Nazareth with the Holy Ghost and with power; who went about doing good, and healing all that were oppressed of the devil; for God was with him.

Oppression implies that the enemy is coming from outside to attack the fellow being oppressed. The devil’s agent carrying out the attack is usually someone very close to the victim.

Many years ago, we were having a programme and God said that there was somebody in the congregation whose mother was using diabolical means to prevent her from getting married. God said if the mother did not set her child free, she would die in seven days. The following day, a young lady who was over 30 years old and unmarried stormed into my office with her mother. The mother confronted me saying, “My daughter came home and told me you said if I don’t allow her to marry, I will die”. I responded that the message was not directed to her in particular but to anyone preventing their children from getting married. The woman then asked her daughter to leave my office for a moment, before saying, “It’s not that I don’t want her to marry, just that she is the one taking care of me; what will I do when she gets married?” I said she should have told us and we would talk to the girl’s husband to ensure he takes care of her. The girl got married 6 months thereafter. May the Lord deliver you completely from any form of oppression, in Jesus’ name.

PRAYER POINT:
Father, let every heavy load that has been put on me by the enemy be destroyed now, in Jesus’ name. 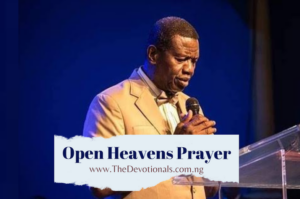