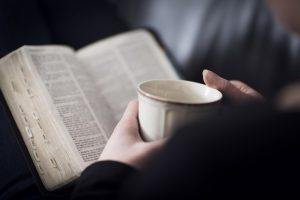 7. Then said Saul unto his servants, Seek me a woman that hath a familiar spirit, that I may go to her, and enquire of her. And his servants said to him, Behold, there is a woman that hath a familiar spirit at Endor.
8. And Saul disguised himself, and put on other raiment, and he went, and two men with him, and they came to the woman by night; and he said, I pray thee, divine unto me by the familiar spirit, and bring me him up, whom I shall name unto thee.
9. And the woman said unto him, Behold, thou knowest what Saul hath done, how he hath cut off those that have familiar spirits, and the wizards, out of the land; wherefore then layest thou a snare for my life, to cause me to die?
10. And Saul sware to her by the LORD, saying, As the LORD liveth, there shall no punishment happen to thee for this thing.
11. Then said the woman, Whom shall I bring up unto thee? And he said, Bring me up Samuel.
12. And when the woman saw Samuel, she cried with a loud voice; and the woman spake to Saul, saying, Why hast thou deceived me? for thou art Saul.
13. And the king said unto her, Be not afraid; for what sawest thou? And the woman said unto Saul, I saw gods ascending out of the earth.
14. And he said unto her, What form is he of? And she said, An old man cometh up; and he is covered with a mantle. And Saul perceived that it was Samuel, and he stooped with his face to the ground, and bowed himself.
15. And Samuel said to Saul, Why hast thou disquieted me, to bring me up? And Saul answered, I am sore distressed; for the Philistines make war against me, and God is departed from me, and answereth me no more, neither by prophets, nor by dreams; therefore I have called thee, that thou mayest make known unto me what I shall do.

It was reported that Frances Havergal, a songwriter, lived and moved in the word of God. His word was her constant companion. On the last day of her life, she asked a friend to read to her the forty second chapter of Isaiah. When the friend read the sixth verse: “I the Lord have called thee in righteousness, and will hold thine hand, and will keep thee”, Miss Havergal stopped her. She whispered, “Called-held-kept. I can go home on that!” And she did go home on that. But alas, it was not so with King Saul. On his last night on earth, he was keeping an appointment with the devil.

Saul was chosen by God to be king over Israel. Although he started well, but it was not for long. Pride, envy and self management got the better of him and he later completely forsook the wise counsel of Samuel, the prophet God used to put him in office. Faced with a serious attack from the Philistines, he sought the face of God that he had abandoned for so long and God did not speak to him. When every effort to get godly counsel failed, he sought help from satanic powers that he had once opposed. His own servants led him to the witch at Endor who eventually conjured an apparition that predicted his death within 24 hours.

No matter how long one has been in the faith, Satan will still go after one’s soul. John says, “The thief cometh not, but for to steal, and to kill, and to destroy: I am come that they might have life, and that they might have it more abundantly” (John 10:10). Satan is after children of God and desires to turn them away from the faith. Saul had enough warning to turn around before he died but he did not. May you find the grace to make your life right with God today. Who knows whether this might be your last time of reading this devotional?
THOUGHT FOR THE DAY:
It is not too late to turn to God – do it now.
THE BIBLE IN ONE YEAR:
Psalm 110-118